Voluntaryist Origins VI is a success! Next steps. 

The 10th Anniversary Voluntaryist campaign is a complete success with both hitting goal and unlocking 3 stretch goals!

This means that all physical perk backers will be getting a bonus sticker for hitting goal and those at the print comic tier and above will also be getting the bonus character sheet, bonus game card, and Voluntaryist team art print on top.

To thank you for going above and beyond for this issue, I am going to go ahead and unlock the 4th stretch goal bonus and add that to your perk packages as my way of saying, “Thank you!” for giving me this opportunity to take the Origins story and put it into a start-to-finish remastered read. So that will add on another Voluntaryist art print and a die cut sticker to your perk packages at the print comic tier and higher.

I could not have made it this far if it was not for your generous support and trust in building out the Voluntaryist universe.

That said, there are some important details for you to be aware of so that everything goes smoothly as I work toward creating the comics and fulfilling the perks.

I will be working incrementally on the comic sequentials, starting with issue VI. I have already completed over a dozen pencil pages for issue VI, but we still need to finish the rest of the issue and then lay the inks, colors, and letters.

As I am working incrementally, issue VI will be finished first before the Origins I and II remasters.

I plan on shipping out the issue VI perks as soon as that issue and the associated perks are ready.

This means that those who got the trade paperback or the I-VI single issue set will get their perks later when the remasters and new covers are complete.

The trade paperback will likely take until closer to the estimated delivery date in late 2023 because it involves both remastering issues 1 and 2 and adding more pages to give extra lettering space.

I will be making updates at least once per month through the Indiegogo page and in parallel on the http://volcomic.com Website.

So, if you are ever wondering what’s going on with the development, please be sure to check with either site so you can get the latest progression update.

I will also give everyone a heads-up update message whenever I plan to do shipment.

Please be sure to update your address if you have moved or plan to move by the time shipping is to take place.

You can log into the Indiegogo dashboard for this campaign and update your address there for us. You can also e-mail me at mr.voluntary(at)gmail(dot)com if you have any trouble logging in with the email you used for your perk purchase.

You can read the Indiegogo FAQ for more helpful information:

If you are an advertiser, please get in touch with me at least a week before the end of August, 2022, so that we can go over your ad to make sure it’s fit for print. I sent all advertisers an e-mail detailing the format with the comic book template attached for respective single and double-page ads. If you did not get this, check your spam box. If it’s not there, please message me at mr.voluntary(at)gmail(dot)com so that I can make sure you have the needed sizing specs and template for your ad.

For those who chose the “donation” option on Indiegogo (which really should be labelled “gift” because we’re not a charitable organization), you will not be getting a perk. You can tell that this was selected if you did not get a prompt for putting in your shipping information when you checked out (minus the digital early release which has no shipping). If you did this in error, but would like to get a perk, please let me know what tier you supported with by emailing me at mr.voluntary(at)gmail(dot)com and I will invoice you for the shipping to get your shipment address.

This is going to be a wild ride getting this project done, but I have never been more thankful and excited because this finished compendium is going to make Voluntaryist a serious competitor in the alt comics world with having the Origins story in a completed format I can readily showcase for convention tabling.

Cheers to us in helping be the change we want to see, especially with the direction mainstream comics have taken these past few years.

Everything is moving along swimmingly with the Voluntaryist Origins V production process.

I have another SNEAK PEEK to share with you from our inking stage:

The details are filling in quite nicely.

If you want to order past issues, you can do so over at Indyplanet here:

Pho and I recently attended YAL Revolution and we got a little spoiled by having a private meet with the legendary Ron Paul:

He’s still the same guy trying to get people to realize that government is not the solution to their problems.

Looking forward to updating you on the next development for Voluntaryist Origins V! 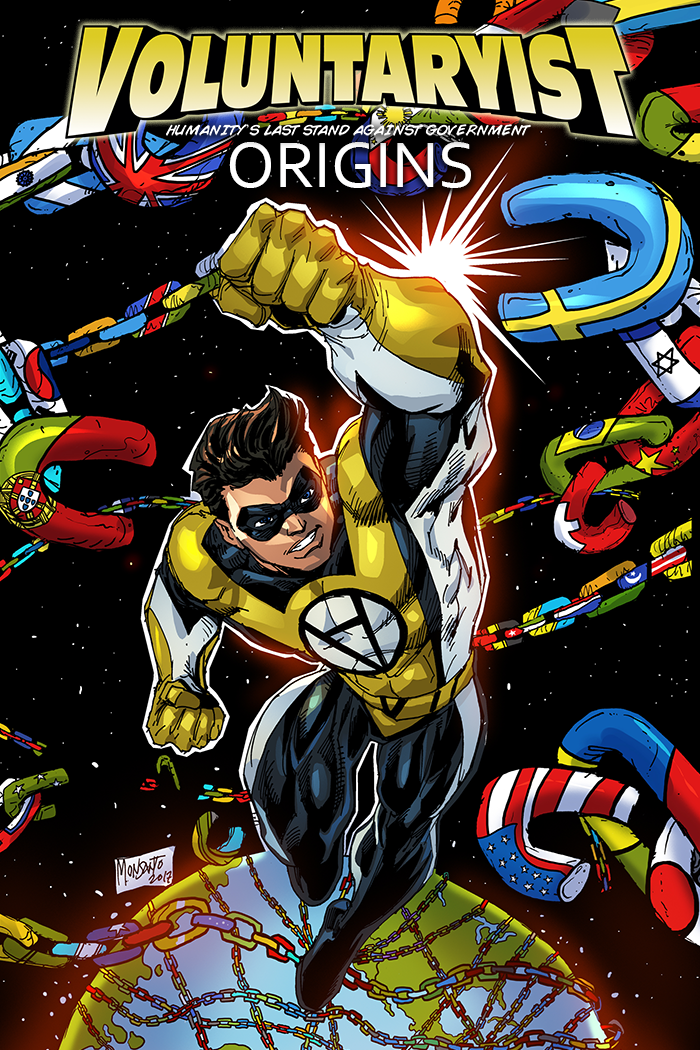 Sneak Peek 2 – Saving Snowden: The Voluntaryists versus the NSA

Enjoy this sneak peek No. 2 for the latest issue- Saving Snowden: The Voluntaryists versus the NSA!