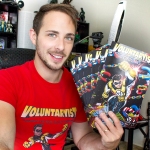 I am excited to announce that the printed copies of the comics have arrived. I’m looking forward to packing and shipping them to you! 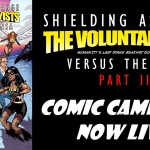