WHAT IS NEXT? FIND OUT HERE!

I spoke with the artist Rob Dumo today and everything is looking good. We will be working on the project with the anticipation of having the comic finished by or before the end of January. The comic should be sent soon thereafter in .pdf. Those who got the printed comic will get it shortly after that because I have to send the files to Ka-Blam for printing then shipping etc.

The full funds from the campaign will be released in about 1 week, but we will begin working a.s.a.p.

Non-comic perks should be mailed out once the funds disburse, so hopefully the week of November 26th they will be sent.

Those who ordered t-shirts will be getting them sent from Meg McLain. I took care of t-shirt orders as they came in.

I will be posting the entire origins story with the additional Suit Saga portion in a .pdf, so you will be able to download and read the entire story compiled. (The .pdf will be hosted here on the http://volcomic.com Website).

For updates with images/pictures/news, please check back at this site. I will use the indiegogo.com site for crucial updates. (Ex. Release dates/shipping dates/.pdf release).

Thank you so much to every person here again! This was only possible because of you. It’s incredible what you have done to bring Voluntaryism into comics and how much we can shape the world for liberty through this medium!

I look forward to keeping you up-to-date and to pursuing a freer future with you.

THANK YOU FOR THE GREAT COMIC FUNDRAISING SUCCESS!

THANK YOU FOR MAKING THE VOLUNTARYIST COMIC PROJECT A SUCCESS!

WE LOOK FORWARD TO SENDING YOU YOUR PERKS AND KEEPING YOU Up-To-Date ON THE COMIC PRODUCTION!

We will be giving a summary of what will be happening next soon! Stayed tuned here at https://volcomic.com/ for more updates!

Thank you to every one for making this project possible by giving your time, money, and Facebook wall spaces.

There are only a few short days left, so now is the time to jump on board!

To give you a sense of what we have accomplished so far, take a look at the stats from our page, http://indiegogo.com/volcomic:

THAT IS AN INCREDIBLE FEAT! CHECK IT FOR YOURSELF – WE HAVE ONE OF THE MOST “LIKED” PROJECTS ON INDIEGOGO. And, to top it off, the Voluntaryist Comic Project has been on the front of the comics section of indiegogo for several weeks – which means that people who have never heard of Voluntaryism before just got ambushed with the wonderful idea called the “Non-Aggression principle!” ( :

So again, if you were ever on the edge about when to support, THE TIME IS NOW! Once the campaign closes, that will dictate the amount of pages which will be in the comic. Hopefully, we will at least hit the $2,700 mark which should allow us to create 12 pages. (1 Cover, 11 interior comic pages and 1 banner-ad page.)

Thank you for standing for liberty friends, 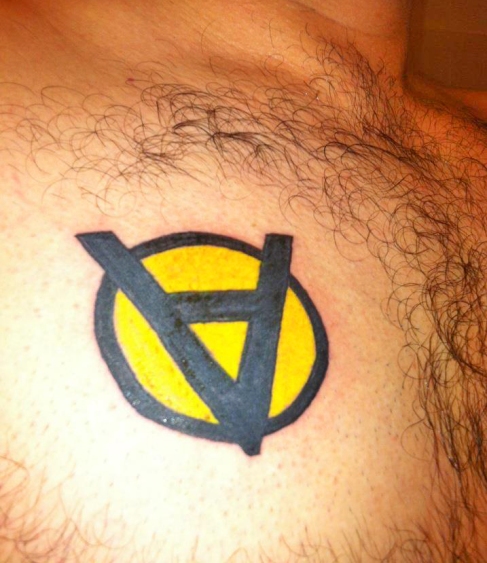 Thomas S., a lover of liberty and body art, has shared his latest piece with us.